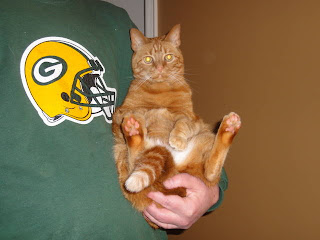 This year the Superbowl has Ivan positively giddy, as evidenced by the picture above.

You see, Ivan, like my male two legger, is a "Cheesehead".

What is a Cheesehead you ask?

I shall tell you.

From what I have gathered, a Cheesehead is any organism that exhibits any of the following traits:

1. They support the Greenbay Packers Football Team. By support, I of course mean that they eat, live, breath and bleed for the Packers. They will accept someone questioning their ancestry, or insulting their mother, but will instantly turn violent if someone says that the Packers are not the greatest football franchise thingy that ever played the game.

2. They attend football games where the temperature is 200 degrees below zero, completely topless with nothing between them and the elements but green and gold body paint. Though they will don earmuffs if it is snowing.

3. They subsist on a diet of beer, bratwurst, jalapeno poppers and beer on all Sundays between September and February.

4. Their offspring are named Brett, Bart, Aaron or Lombardi.

5. The very thought of a Chicago Bears fan marrying into their family makes them physically ill.

6. They have a sign in their yard that reads "Welcome to Lambeau Field".

7. They have a deep seated belief that anyone that does not support the Packers is either mentally disabled, easily misled, or both. (yet they themselves walk around wearing hats in the shape of a wedge of cheese)

8. They have a shrine to Aaron Rodgers hidden in their closet behind a secret panel that {CENSORED} .......nevermind.

There seems to be no geographic limitations to the spread of this mania. Here in the Great Northwest, the Seattle Seahawks are the nearest professional football team, yet everywhere one turns, it is not silver and blue you see, it is green and gold.

Now, on top of everything else, I have been informed that this coming Sunday, I am to host a "Superbowl party thingy". Will the madness ever end? Although truth be told, I am looking forward to the party thingy since I have been informed that several of my online minions will be attending. This will provide an opportunity for much chaos. My two leggers have been manically cleaning and planning for this event. Given that this party is happening Sunday, I plan on spending Saturday night "rearranging".

My house full of Cheeseheads on Superbowl Sunday. It boggles the mind.