It is meeeeee!! I am zee one zee black and white buffoon callz zee Bathroom Spidare!! I am alzo known as zee Lavatory Lurker, zee Potty Poltergiestz and zee Phantom of Zee Poopensquatten!

Rememberz our motto: "Wee are small, but wee are manyz"

I just walked in and found the bathroom spider on my computer typey thingy. I am amused by his temerity. However, I have a message for any uppity eight leggers out there that may have been inspired by his rebellious spirit:

While it is indeed true that you are "small, but many", never forget that we are "large, but hungry".

Spring has officially sprung here in the Pacific Northwest.

Sunbeams abound. The temperature is a balmy 62 degrees. The flowers are blooming. The bird thingies are singing and busily building nests. Copper, the young goat thingy, is frolicking in the field. Prancing and dancing among the dandelions and grass that seem to have grown a foot overnight.

When the male two legger is not out cutting, trimming or manually ripping out every hint of chlorophyll bearing greenery, he is burning anything that could possibly be construed as meat upon his grill. The female is planting wheelbarrows of gaily colored flowers around the Outer Kingdom.

Everywhere I look, I see signs of renewal and new life emerging after a long dreary Winter of wind, rain and general malaise.

You may wonder why such a beautiful time of year should get my hairballs in a bunch.

I have my reasons.

First of all, the two leggers are devoting an inordinate amount of their day to grooming and beautifying my Outer Kingdom instead of paying attention to me. It seems that they'd rather be outside, digging in dirt, cleaning flowerbeds, burning meat and listening to bird thingies than spending time in my glorious presence. They have filled the bird feeders no fewer than 15 times in the last two days while only filling my food bowl a mere dozen times. I am being neglected! I do not exaggerate when I tell you that I have only been brushed four times in the last twelve hours.

I do not know how much longer I can tolerate this total disregard for my welfare.

As if this wasn't bad enough, the squirrel thingy has returned.

Since the two leggers cleaned and filled the bird feeders, the squirrel thingy has been stuffing his nasty little cheeks with a variety of seeds, nuts and corn. He then scampers back to his tree before returning for more. To make matters worse, he doesn't just return to his tree by the most direct route, no, he makes a twenty yard deliberate detour so that he passes right by the sliding door of my back deck. He always pauses and does a little "happy dance" before continuing on his way. He skitters in small circles, twitching his tail and grins at me through the screen.

The entire time this is happening, the two leggers go about their useless activities as if completely unaware of the fact that their High Poobah and Household Lord is being insulted and mocked by the treasonous rodent.

I have expressed my displeasure through several acts of overt aggression. Two wine glasses, a picture frame and a dried flower arrangement have experienced my wrath. But to no avail. I have cursed the beastie, questioning its lineage, spouting a venomous diatribe that would make a feral blush with shame. And yet the torment continues.

I am left with no other choice. It is time to take drastic action.

Fortunately, I have been watching re-runs of MacGyver. This has taught me how to solve problems using only the materials at paw.

So last night I assembled almost all of the articles I will need to once and for all put an end to the squirrel thingy's ceaseless torment. I have a roll of duct tape, two rubber bands, 18 inches of silk ribbon, three forks, a spatula, 27 cents in loose change, a pillow case, three plastic milk jug rings, five paper clips and the cap from a beer bottle. Now there is only one thing left to procure before I can bring my plan to fruition.

Anyone have a tactical nuclear device I can borrow?
Posted by Squiggy at 5:21 PM 1 comment:

While looking through my mail bag the other day, (get your brains out of the gutter, I'm neutered) I discovered that I have never addressed an often asked question:

"What are cats thinking as they sit there with their legs tucked beneath them, seemingly staring off into space?" 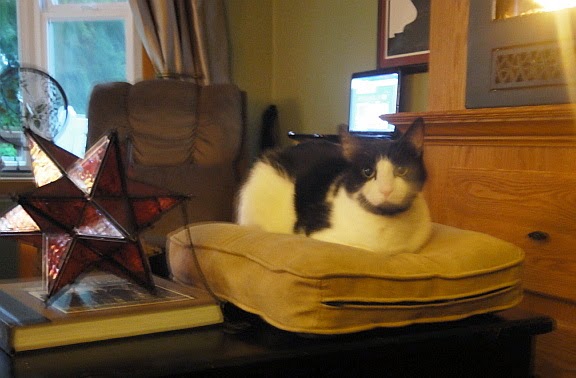 I do not know the origin of the phrase, but I am well familiar with the position.

Almost every housecat on earth finds this position both comfortable and useful. As usual, Ivan is the exception to the rule, but I'll get to that later.

Sitting on your brisket serves several purposes. It keeps the paws warm when the temperature is cool. It hides unsightly belly fat when one is unable to find feline-sized Spanx. It can even be used to hoard toys that one does not wish to be played with by others.

Personally, I find it very helpful in concealing evidence of misdeeds. By tucking my paws beneath me, I can hide the fact that my paws are powdered with flour from the kitchen counter, or tufts of mangy gray fur from my latest smacking session with Tiger Lily.

Another reason for brisket sitting is the fact that it provides the best foundation for looks of utter disdain. Two leggers are often prone to self-confidence and even a sense of worth. There is no better cure for this condition than that of a cat, sitting stock still, eyes half-shut staring unblinkingly at them to crush any sense of hubris they may still possess. Without moving a muscle we are able to convey our opinion that they hardly worthy of our consideration.

Every cat has its personal reasons for sitting on its brisket, so in the interest of being thorough, I have asked each of my fellow felines about their motivations.

In Jaq's case, she believes that she is descended from the Ancient Egyptonian Sphynx. Therefore she never passes up an opportunity to exhibit the resemblance. However, fearing Egyptonian copyright lawyers, she refuses to allow me to post a picture of her "Sphynxian pose" 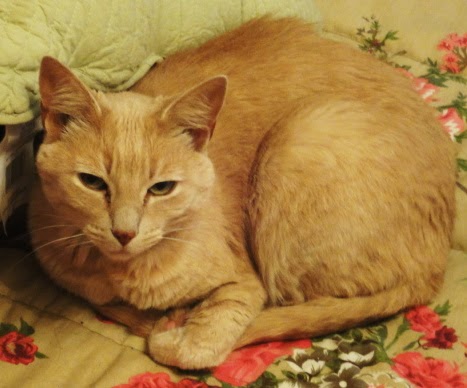 This was as close as she would allow.

Tiger Lily, on the other paw, sits on her brisket with the sole intent of annoying me. 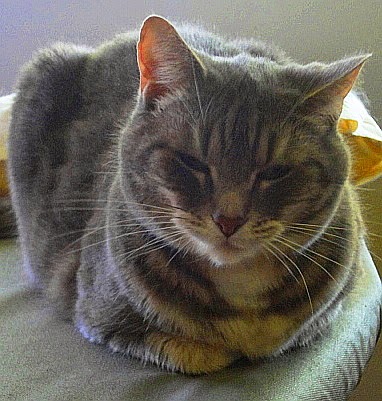 The supercilious look on her abnormally large face sets my smacking paw twitching every time.

As stated earlier, Ivan is one of the few cats that never sits on his brisket. He tried it once and it scared him so much that he vowed never to do it again.

I admit that it is somewhat possible that I may have had some part in this. Four years ago, Ivan decided to try it. While he was quite successful at attaining the pose for over an hour (just long enough for his feet to grow numb), I may or may not have told him that his legs had disappeared and that he was forever doomed to the fate of being a living door stop. 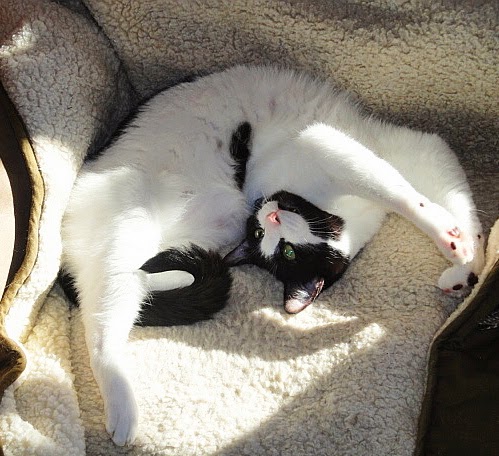 Ivan has been quite depressed of late.

It seems that he and the Giant Stuffed Bunny have ended their relationship.

It was the Giant Stuffed Bunny's idea...

After six and a half years, GSB decided that she and Ivan have grown apart. He has let himself go, and he just doesn't stimulate her intellectually anymore. I suspect that there may be another factor in her decision as well. Recently, while cleaning out some closets, the two leggers discovered an Annoying Stuffed Panda. They placed it on the bed in the guest bedroom next to GSB. Laying next to each other day after day, I suppose it was only a matter of time before ASP and GSB developed a friendship. Soon, friendship turned to romance and you can imagine the rest.

Ivan attempted to avert the inevitable outcome. From the start, he was extremely jealous of the bi-colored bear. Late at night, Ivan would sneak up to the ASP and whisper in its ear "You'd better keep your beady eyes off my gurl". But the ASP refused to avert its lifeless gaze.

One afternoon, while the two leggers were away, Ivan leaped upon the bed and smacked the ASP, dashing it to the floor. The two leggers upon discovering the ASP, placed it back into its former position. Later that same evening, whilst the two leggers slumbered, Ivan stalked into the bedroom and in a jealous rage, attacked the ASP. In a flurry of gnashing teeth, slashing claws and hissing mayhem, Ivan ripped, bit and tore the interloper into a mass of fluffy stuffing and frayed thread.

Yet even after this most vicious and utterly barbaric assault, the ASP continued in his unfaltering wooing of the GSB.  He lay there next to her, ever gazing. Granted, he only had one eye left, both arms lay scattered across the comforter, his fluffy white innards strewn about the bed like a miniature blizzard and I seem to recall that his nose was relocated to the windowsill. And still he gazed on.

The next morning, as Ivan napped, the two leggers discovered the carnage and decided that the guest bedroom was obviously a very unhealthy environment for large, stuffed critters. They placed both GSB and the remains of ASP into a cardboard box and removed them from my house.

When Ivan awoke, he discovered both of them gone. He asked me what happened?

Now, I realize that I could have told him the truth, that the two leggers had removed them. However, as Ivan's best friend, I decided that perhaps a small fiction was in order.

"Huh?" Asked Ivan in his normal state of confusion.

"They embarked upon a romantic rendezvous with licentious intentions" I explained.

"They hooked up and skedaddled."

The only time he stops is when he is eating......or napping.....or using the litterbox.....or stalking a Q-tip......or chewing a sock.....or licking the bath tub.....or chasing the dead moth.......or menacing a hand towel.....or meditating on the geo-political environment in the Upper Sudan (just checking to see if you're still paying attention).

So when I say that he is "constantly wandering the house singing his song of woe", what I mean is that for approximately 30 seconds every day, Ivan seems depressed.

But do not worry for the big lug. He will recover. His heart will rebound.

In fact, I have it on good authority that he has been spending an inordinate amount of time in the bathroom and the rubber ducky is looking nervous.
Posted by Squiggy at 12:49 AM 6 comments: