Okay, the whole "Dr. Cujo" thingy did not work out.

Within days of opening my practice, I began receiving correspondence from several organizations that seemed to take issue with my medical endeavors. The American Medical Association (AMA), The World Health Organization (WHO), The Center for Disease Control (CDC), The Arkansas Bureau of Squirrel Husbandry (ABSH) and The International Office of Acronym Administration (IOAA),  all wrote to me express their concerns about my new vocation.

It seems that watching several episodes of The Dr. Oz show and over 45 minutes of internet research (between naps) is not "good enough" for some people.

The heck with that.

So I've decided to make money by other means......

While watching the talking box thingy, I came across something called an "infomercial". It was incredibly annoying and therefore captured my attention immediately. It was hosted by an over-caffienated two legger who was obviously very skeptical of his own intentions as well as doubtful of his own sanity.  He kept shouting stuff like "I CAN'T BELIEVE I'M DOING THIS!!" and "I MUST BE CRAZY!!"

His manic insanity aside, he must have been doing something right because bunches of two leggers were lining up up with their money and credit cards in hand.

I don't even remember what he was selling, only that it was plastic, did a bunch of stuff and he was "practically giving it away". 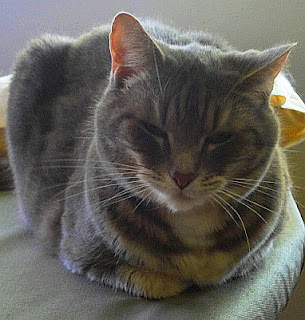 Have I got a deal for you!

Today and today only, I am offering this one of a kind deal!

It whines!
It dines!
It will drive your pets WILD!!!
Got a neighbor that is always being a nuisance? Throwing wild parties and causing noise?
Install this beauty and get some revenge! They will beat a path to your door, asking you to "Please, for the love of God, just turn it off!"
Mice and other household pests will leave and never come back!

According to the American Medical Association, stress is the number one cause of death in the United States.....That is why YOU MUST buy this product!
You can slap, smack and attack it whenever you are feeling down. Guaranteed to lower your blood pressure instantly! 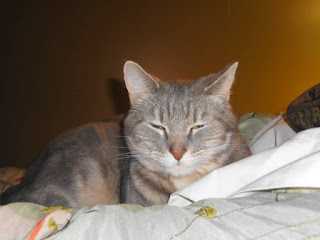 Call now and I will even throw in two pairs of Extra Heavy-Duty, Industrial Strength, Justin Bieber-Proof Ear Plugs!!

Don't let this deal get away! Quantities are limited! (one)

Act now and I will throw in this limited-edition, one-of-a-kind Home Amusement Center: 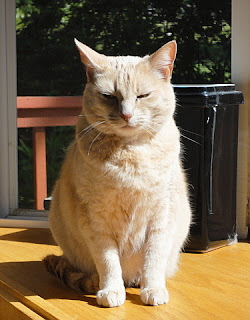 That's right! You too can own this magnificent example of curious insanity! It comes with a complete soundtrack of American Music as well as some selections of 60's British Rock.

There is nothing quite like waking at 3am to the beautiful sound of "The Who" being sung from a shoebox beneath your bed!

And it NEVER NEEDS BATTERIES!!!!

Simply place it in the nearest window to recharge the solar cells! 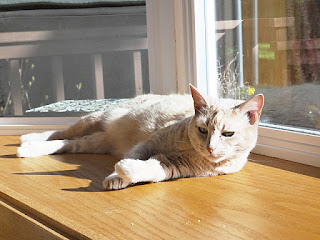 Your order will be shipped to you wrapped in this super special protective "Ultra Blue Zig-Zag" patterned wrapping material at NO EXTRA CHARGE! 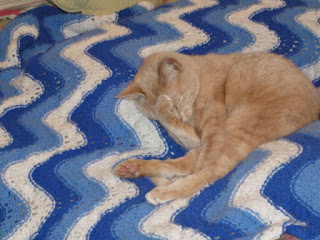 ACT NOW!! Our operator is standing by! 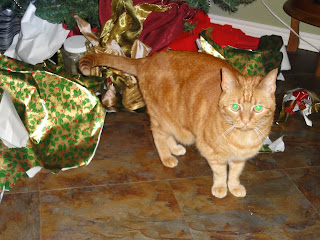 It occurs to me that perhaps I am in the wrong business.

Oh sure, being a cat, a blogger, and author of two books that appear repeatedly on the "New York Times Worst Seller List" has its perks. I have made friends and minions all over the world thingy. I have enough cat toys and treats to last a dozen life times. FaceBook and internet types hang on my every word and follow my every command. I spend my days napping and my nights creating mayhem and chaos with no fear of suffering consequences. I must admit, I have a good life.

I have no idea what I'd use it for, but I want it.

I have observed that the best way to procure money is to have two leggers give it to you.

While my two leggers were out yesterday, I decided to look through their financial records. While perusing their checkbook, I noticed that they give a lot of money to doctors and vet thingies. It seems that every month they are writing checks to various doctors, hospitals and laboratories. Now, I don't like hospitals, and laboratory has the word "labor" in it, so I have decided to become a doctor.

I spent the rest of the day (between naps) looking at various medical websites, watching "Dr. Oz", and pondering all things medical. I even signed up (using the two legger's credit card) for an online course that promises to teach me Latin in 2,734 easy lessons. I believe I can now hang my shingle and start my new practice.

However, being the conscientious individual that I am, I decided that it would be prudent to try out my newly learned medical skills on my fellow four leggers before revealing my new vocation to the two leggers and demanding their money.

Ivan was my first patient. His examination did not go well. I kept telling him to stick out his tongue and say "Ahhhhhhh". But he was uncooperative and kept saying "Ummmmmmmm". I tried shining a flashlight in his ear, but it only made his eyes twinkle. Finally, I made him lay down and I attempted to listen to his heart. Unfortunately, aside from being big and dumb, Ivan is also acutely ticklish and I couldn't hear his heart over his incessant giggling. Though the exam was difficult, I gleaned enough information to make a diagnosis. Ivan is suffering from Acute Cranial Density. This condition is caused by hardening and thickening of the skull thingy that effectively blocks any intellectual stimuli from entering his noggin while simultaneously preventing what few thoughts he may generate from exiting. Just like his intellect, his prognosis is dim.

I called Tiger Lily in as my next victi......patient. Due to an unfortunate misunderstanding followed by a somewhat sketchy restraining order, I am not allowed within six inches of her, so only a visual examination was performed. Her condition was immediately apparent. Tiger Lily is a victim of a genetic disorder thingy called Irritable Mrowl Syndrome. The primary symptom of IMS is the uncontrollable vocalization of sounds that tend to annoy and anger any semi-intelligent organism within a five-mile range. Unfortunately there is no known cure for IMS, however, it can sometimes be controlled with liberal and aggressive doses of my newly developed drugs Smackitol and Smackitagin.

Jaq proved to be my most difficult patient. She was perfectly willing to be examined, but I quickly realized that some ailments are not necessarily physical. Her ailment seems to be of the mind rather than the body. Her odd behavior, constant giggling, propensity to hiding in boxes and singing show tunes as well as uncontrolled fits of philosophy lead me to the inescapable diagnosis of Panicked Pecan Dementia. In layman's terms......She's freaking nuts.

After several minutes of research, I discovered that there is a simple cure for PPD. However, I have decided not to cure her or even tell her that it is treatable. It is not that the treatment is unorthodox or unethical, I just find her amusing to watch.

Now that I have proven my medical prowess, I will now sit back and wait for the money.

Here in the Pacific Northwest, we have only three seasons.

In a "normal" year, Summer begins on July 5th and usually runs it course by the early evening hours of July 7th. However, this year is different. Summer showed up in early June, and has refused to leave. Like an unwelcome house guest, it has shown up unexpectedly, without invitation, and will not take a hint.

The heating pad hides in the closet. The firebox thingy goes dormant like a sleeping dragon who can't be bothered to breathe its fiery exhalation. The bathroom floor, usually so cozy and warm, refuses to attend to its duty and remains cold and decidedly uncozy.

In contrast, the sunbeam, whose appearance is usually sporadic and unpredictable at best, has outstayed its welcome and become overly aggressive. It no longer gently warms and caresses us as we bask in the bay window. Instead, it seeks to bake and dehydrate us as if we have angered it in some manner and it wishes to punish us.

Some will say that it is not so bad because it is a "dry heat". My response: Ovens cook using "dry heat".

The days are long, sweaty, irritating, brain-numbing and stinky. I suppose this is why they are known as "dog days".

No, Summer does not amuse me.

This Summer is proving the most annoying on record. My Outer Kingdom is dry and parched. There is no cooling breeze.

Ivan just lies in the hallway like a stinky orange speedbump, only stirring when he hears the rattle of the two leggers filling his food bowl. Granted, laying idle is not particularly unusual for Ivan, but he is normally idle in a more active manner. His frantic inactivity is at an all-time low. I have tried to cheer him up by tossing Q-tips (his natural prey) at him, but he remains morose and disinterested.

Tiger Lily has been spending her days in the various, dark nooks and crannies.Obviously her strategy is to hide from the heat. Like Ivan and I, she tends to sleep more during the daytime while coming out in the cooler evening hours to get in her daily whining. Though her whining is as annoying as ever, in this heat, I cannot justify the effort it would require to smack her. Plus, if I am completely honest, I actually find myself agreeing with her complaints.

Jaq seems to be the only four legger unaffected by this heatwave. In fact, I suspect that she may be actually enjoying it. While the rest of us lay around in a heat-induced stupor, she bounces through the house singing various songs by The Beach Boys. While I find "surfer music" annoying, I didn't find her behavior intolerable until she suddenly jumped on the ironing board and belted out her rendition of "Surfing USA" while "hanging ten". Fortunately this drew the ire of the male two legger who removed the ironing/surf board and put it in the closet. Abashed, but undeterred, she settled down and softly hummed "Summer Breeze" by Seals &Croft.

According to the two legger whose job it is to guess the weather, there appears to be no end in sight to this massive heatwave. However, I have a plan.........

Tonight, we will honor the Native American Culture by performing a "Rain Dance".

A few hours after the two leggers go to bed, Ivan and I will begin the ceremony. It will involve house plants (representing nature), a water glass or two (representing....well, water), chanting (Jaq will suffice) and much thumping and wailing.

I am also considering a blood sacrifice, but I fear that Tiger Lily may already be suspicious.....
Posted by Squiggy at 4:59 PM 2 comments: