In my opinion, one of the most disturbing traits that two leggers have is that of glorifying criminals and criminal activity.

Their history is filled with stories of individuals who became famous and celebrated because of their anti-social behavior. Robin Hood, Jesse James, Butch Cassidy, John Dillinger and Justin Bieber, just to name a few.

However, there is one that stands above the rest. His criminal career and list of offenses is longer than that of any other ne'er-do-well in the annals of man. His nefarious empire spans the entire globe and affects every society on Earth. He has thousands upon thousands of willing and unwilling accomplices.

Though his description and crimes are widely known, he has never been arrested, never been indicted, never spent a day in jail.

The location of his evil lair is so well known that millions of children write letters to him every year!

Of course I speak of  the master criminal known as "Santa Claus". According to the FBI, his aliases include: Saint Nicholas, Kris Kringle, Father Christmas, St. Nick, Pere Noel, Nicky Da Nose (in New Jersey) and Sinterklaus among others.

I have researched the crimson criminal and discovered that his offenses include:
31,658,496,637,894,156,627,731,816,614,003 counts of "breaking and entering".
792 counts of "unlawful imprisonment" (the elves he uses as slave labor in his evil lair and sweatshop).
11 counts of "animal cruelty and endangerment" (forcing reindeer to pull his obese carcass around)
Numerous counts of "fraud" and "embezzlement".
97counts of "felonious jollity".

Every year he employs thousands of decoys that go out to department stores to confuse the authorities.

Well if the FBI, CIA, DEA, ATF, DHS or any other tri-lettered government agency won't do anything to put an end to the criminal reign of the felonious fatso, I will......

This year I have set a trap.

It is gloriously simple in its sheer complexity.

The criminal Kringle is always drawn to the large green cat toy that the two leggers insist on calling the "Christmas Tree". On Christmas Eve, Ivan will be hidden among the packages at the base of the tree thingy.  Jaq will be sitting on the back of the couch softly singing various Christmas carols to put Santa at ease. I have already tied up Tiger Lily with several strands of lights and intend to hang her in the bay window to provide a festive atmosphere (hopefully she won't yowl as loud as she did last year when I plug her in). As for myself, I will be concealed deep among the boughs of the tree thingy.

When Santa approaches the tree, Ivan will jump out and commence to chewing on the fat man's ankles. As the festive felon fights to extricate himself from Ivan's merciless maw, with a mighty MROWR!!!!! I shall leap from my place of coniferous concealment directly upon his noggin causing him to drop in a dead faint.

I figure that anyone who subsists on a diet consisting entirely of milk and cookies should be ripe for a massive coronary or at least a minor stroke.

While he is out, we will tie him up with ribbon and gag him with a Christmas stocking.

Thus we will bag the bulbous burglar.

That'll teach him to bring me coal three years in a row.

From the Kingdom of Cujo, I and my minions would like to wish all of you a very merry Christmas and a bountiful New Year. 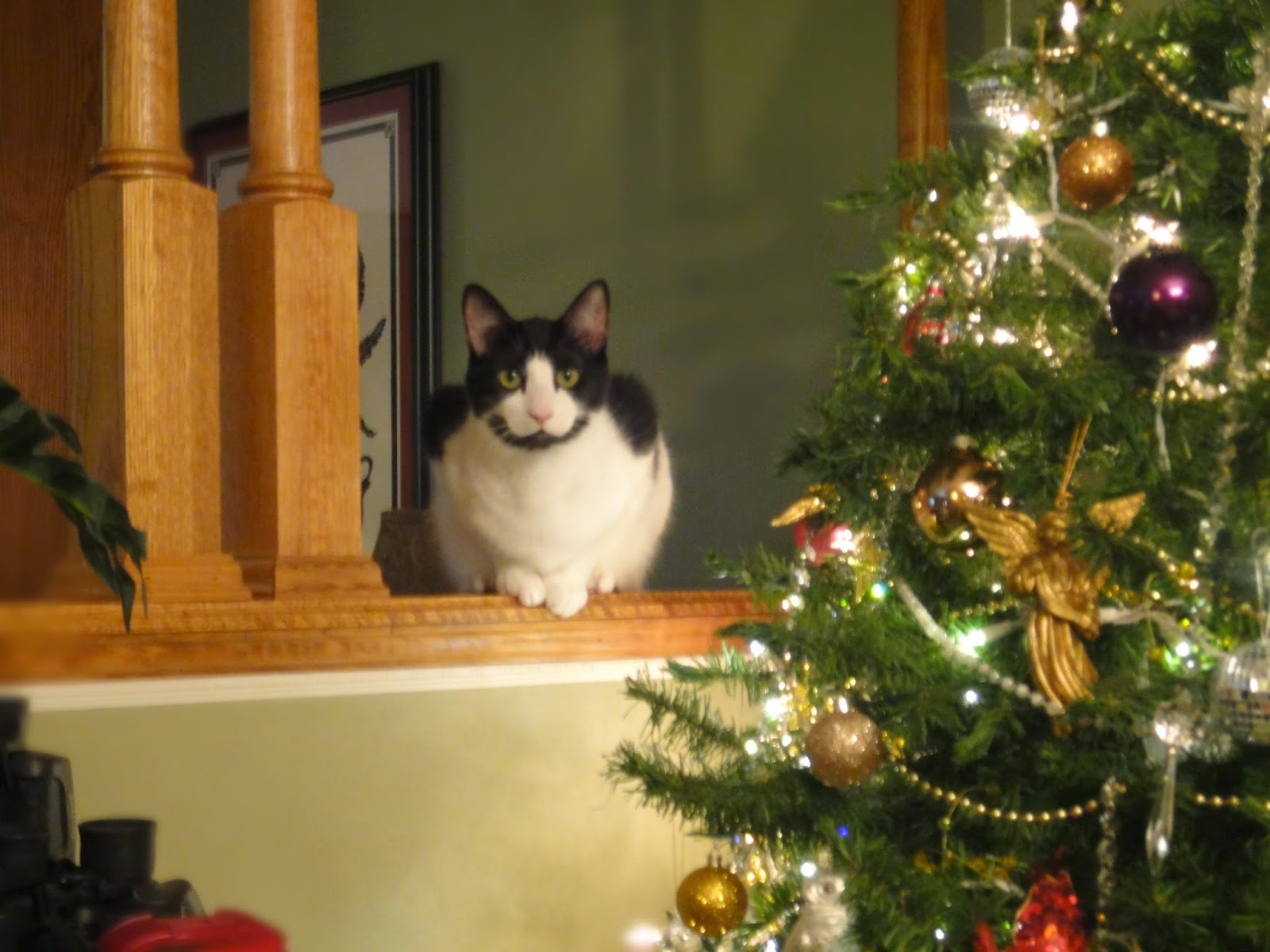 Every now and again, the male two legger enjoys getting together with several other male two leggers. They sit around a large table, drink beer, look at small rectangular pieces of paper and exchange money.

At first, I ignored this activity. There was no chaos and very little bloodshed, therefore it held no interest to me.

However, after a while I came to the realization that they were involved in some sort of game.

Now as a feline, I am a huge fan of games. Games are not only amusing, they also serve as a means of displaying ones superiority over lesser intellects.

As is my way, I decided to research this game that the held such fascination for the male.

The game in question is called "Poker".

This should not be confused with a game I already play called "Poke Her". Poke Her is simply the act of walking by Tiger Lily and giving her a poke in the nose. It is very amusing, but seldom involves any sort of strategy.

There are many different forms of the game, but for the most part they all involve the portioning out of a predetermined number of small rectangular pieces of paper called "cards". Each card thingy has either a number (1-10),  a picture of a royal personage (Curiously, I am not featured at all), or the letter ''A". In addition, each card thingy has one of four symbols displayed in each corner. The four symbols consist of a red heart, a red diamond, a black clover and a black upside-down heart on a stick.

It is all very complicated and I will not bore you with details.

That being said, I saw great potential in forming my own game of Poker.

While the two leggers were at work, I called my fellow felines together and invited (ordered) them to take part in my new game.

Obviously the game we played would be somewhat different from that of the two leggers. Where the two leggers used a deck of 52 cards, we could find only 14 under the couch and three under the icebox thingy. Other than the credit card I have hidden in the kitty carrier, we had no money, but I told everyone to bring all their valuable possessions to use as stakes.

I dealt out the 17 cards evenly. Four for each of them, five for me (it was my deck after all). Jaq immediately bet an old gym sock. Ivan saw the gym sock and hid in the bathroom for the next five minutes (he's odd that way). After convincing Ivan to rejoin the game, I raised Jaq's bet by a catnip mousie thingy and a dessicated moth I'd been saving for a snack. Tiger Lily was unsure of her cards so I folded her. Ivan was still confused and sat there chewing on one of his cards until losing my patience, I smacked him and he hid in the tub again. In his absence, I exercised my right as the dealer and bet for him. I assumed he thought he had good cards and bet everything he had. This amounted to a Q-Tip, two plastic milk jug rings, a shapeless mass that may or may not have been a dust bunny in a former life and a bottle cap he named "Steve".

Now came the time to reveal our cards and determine a winner.

Ivan had a "Kardashian" (all diamonds, but no heart)

But none of them could beat my "San Francisco Flat Tire" (four queens and a jack).

I declared the game a success and plan to hold another one soon.

On a side note, Ivan was very disappointed that the "Royal Flush" he had in the bathroom didn't count.

The Paw of Fate

While going through my email the other day, I came across one that sparked my interest.

It read:
Dearest Cujo,
I have been reading lately about animals that seem to have some kind of "sixth sense". Some animals have been able to tell when someone has cancer, or is about to go into diabetic shock. Some act strange just prior to a natural disaster or cataclysm. I even read one story about a cat at a nursing home who could tell when a resident was about to pass on.
I am sure that as Supreme Dictator, High Poobah and Benevolent Tyrant of All Universes (known and unknown), you would have some insight into this seemingly unexplainable phenomenon.
Your Devoted Minion,
Cuddles McBloodletter

Thank you Cuddles for your question.

Once again I shall spread some fertilizer upon the barren soil of two legger knowledge in the hopes that the seeds of wisdom may begin to sprout.

Throughout history there have been stories of animals having special senses. Dog thingies barking and howling just prior to an earthquake, rats vacating a doomed ship before it sails, birds vanishing before a storm, Charlie Sheen leaving the cast of "Two and A Half Men".......the list goes on and on.

I am here to tell you that there is absolutely nothing "supernatural" about any of this. Supernatural is simply a word that two leggers use because it is anathema for them to ever admit that they can't figure something out.

However, I'd like to focus on the four leggers that are accredited with diagnosing disease or predicting the deaths of two leggers.

I have personally witnessed this phenomenon on several occasions.

Just last week while the male two legger was eating the last muffin, Ivan predicted that he would soon suffer from spontaneous hemorrhaging of his left ankle and subsequent tummy growls. Within thirty seconds his prediction came true after he bit the ankle and ate the muffin while the male searched for bandages.

I have an innate talent for predicting chronic insomnia. I can personally guarantee that every time the two leggers neglect to close the bedroom door when they retire for the evening, sleeplessness on their part will ensue. Sometimes, I can even predict it by simply staring at their picture while Jaq sings a funeral dirge. 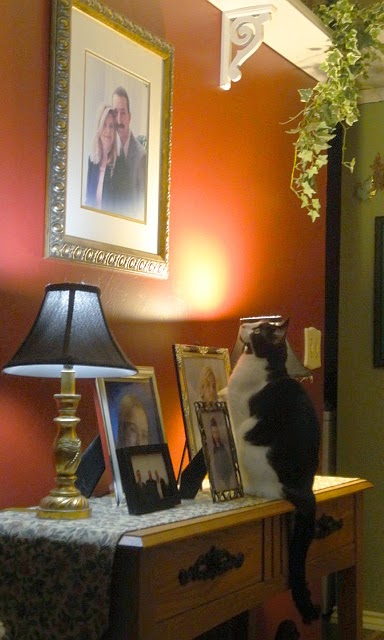 I have also been known to predict high blood pressure and male pattern baldness.

One of the more sensational stories I have heard was a news story about a cat in a Michigan nursing home that could predict the impending deaths of elderly residents. It seems that every time a patient was about to die, the cat, whom the staff had named "Val" (short for "Valkyrie, Bringer of Death and Other Gloomy Stuff), would enter the doomed patient's room, jump up on their bed and yowl loudly for a few minutes before calmly walking out with tail straight in the air.

First of all, any feline with a reputation as a harbinger of mortal doom would by his very presence, probably become a self-fulfilling prophesy.

Plus, consider the target-rich environment.

The odds speak for themselves.