As many of you are aware, my computer typey thingy bit the proverbial dust last week. 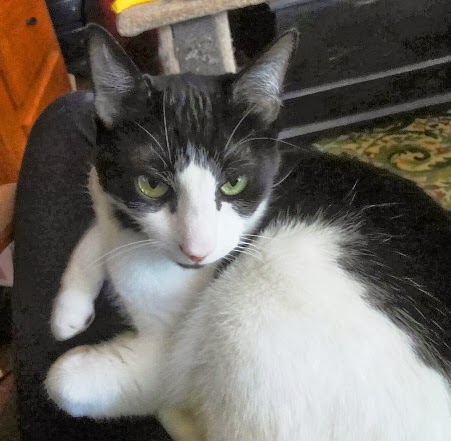 I was not amused.

I commanded the male two legger to repair the machine immediately.

I was unsure if he was up to the task. As far as I know, he hasn't mastered any computer thingy since learning Abacus 2.0, however, I was willing to give him a chance.

After several hours of unfruitful head-scratching, mumbling, cursing, a couple of exclamations of "EUREKA!" followed by more head-scratching and cursing, he informed me that we would soon be visited by something called "The Greek Squad".

I must admit to being somewhat excited at this prospect. Being a student of history, I have always been fascinated by the society that brought us Plato, Socrates and a pledge to honor pictures of African animals called "The Hippo-graphic Oath". And so the next day I eagerly awaited the arrival of the Greeks in all their bed sheet clad splendor. Perhaps while they repaired my computer typey thingy, I would share my own philosophical thoughts and thus add to their already legendary legacy.

So imagine my surprise when instead of a chariot being pulled by great white stallions, a little bitty SmartCar thingy pulled into my driveway. No gray-bearded, toga-clad two leggers climbed out of yon micromobile. Instead, two semi-adolescent male two leggers knocked upon my door wearing white shirts, black ties, and black trousers that if they had been six inches longer, would have still been eight inches too short. They had fastened to their shirts name tags that identified them as Rory and Jeremy. Beneath their names, was the title "GeekSquad Technician".

I now understood that my two legger had obviously been misinformed and had called in the wrong team to repair my computer. However, he seemed to not notice his mistake and spoke to them as though they were the people he expected. As he was greeting them, Ivan, Tiger Lily and Jaq had entered the room to observe. "Rory" immediately asked to see the naughty laptop. Laughing hysterically, my two legger turned and pointed to each of us and asked "Which naughty laptop do you wish to see?". (His wit is only surpassed by his ability to teleport)

Rory who seemed to be one of the other 99.9996% of humanity who do not understand my two legger's sense of humor, stared at him blankly. Somewhat deflated, my two legger handed over my laptop, and the two pushed their eyeglasses further up their noses, hiked up their britches and began assessing the issue.

For the next 45 minutes, they performed a procedure that is apparently taught at only the best computer repair schools. It is called the "Turn The Darned Thing Off and Then Turn It Back On Again Maneuver".

Approximately 90 minutes later, they reached the mind-boggling conclusion that my computer was indeed "non-functional". This came as a great surprise to me given the fact that I had been completely unable to make it "function" for the last three days. They declared that they needed to take it back to their nerd nest and attempt to repair it there.

That being said, I am back online now. I appreciate your patience and understanding during this trying time.

Fortunately, the internet thingy managed to continue on even though there was one less cat last week.
Posted by Squiggy at 9:54 PM