What the hell happened to my yard?

I am confused. Yesterday, around 9 am, I settled down for my early mid-morning nap. I chose the front bay window as the spot because the sun was shining and therefore it was prime napping real estate. Gazing out at the green grass, I drifted off to sleep.

I was in the middle of a wonderful dream that involved a decapitated squirrel and a one winged bird (it kept flying in circles), when I was awakened by the sound of Ivan running through my house in full blown poofy fur, crooked tail freakout mode. Now, it doesn't take much to freak out Ivan (simply asking him where his tail went usually accomplishes this) but this freakout seemed beyond the pale.

I opened my eyes slowly, working up to a major league tabby smack, and to my utter astonishment discovered that the entire outside world had changed. The sun was gone and everything was covered in big white flaky thingies (and I'm not referring to talk show hosts).

These big white flaky thingies (BWFT's) were falling from the sky at an enormous rate. They fell silently and slowly, threatening to lull me back to sleep. Fortunately my curiosity served to keep me awake so that I could ponder this oddity. 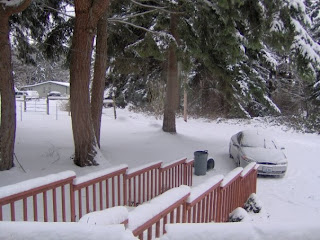 The first thing I noticed was the scarcity of any four leggers in the yard. Normally, the deck bunny is hopping around the front yard at this time of day. He was nowhere to be seen. No bird thingies were in evidence. Even the stupid squirrel was missing. The only four leggers I could see were the goats. They were standing in their shed, clearly displeased, glaring at the house as though this was somehow my doing.

Ivan kept running from window to window trying to capture some of the BWFT's with no success. (Like so many other concepts, Ivan doesn't understand glass) Tiger Lily whined for a while and then curled up on a hot air vent and fell asleep. I'll smack her after I solve this mystery.

Shortly thereafter, the two leggers came home early. To my delight, some of the BWFT's had stuck to the female's boots. I waited while she removed her boots and left them by the door. After she left the room, I was able to examine the BWFT's more closely.

Upon close examination, (sniffing and batting) I discovered that the BWFT's were:
A. Cold
B. Wet
C. Very cold
D. Very Cold and wet.

The only flavor I could discern was leather, presumably from the female's boots.
My conclusion is that the BWFT's are water that has been transformed into a sticky, goat irritating substance.

The male two legger turned on the talking box thingy and watched another two legger talk about a "snow" storm. I soon realized that he was referring to the BWFT's. Best of all, the BWFT's were causing much chaos in two legged society. He spoke of cars in ditches, businesses and schools closing, and roads being blocked. I watched for some time hoping to hear about squirrel casualties, but none were reported. Perhaps they'll find their mangy little corpses after the BWFT's melt. One can only hope.

After much consideration, I have decided that I must learn how to manufacture this stuff.
Posted by Squiggy at 11:08 AM