I am well aware that I have been neglecting my minions for the last week or so.

It is not my fault.

The two leggers have decided that my reign should be documented through photography, and so they sent for The Royal Photographer, Erica. Oh, they will say that since Erica is one of their offspring and she and her mate, Kelly were only visiting for the holidays, but it is a ruse. They simply told me that so that I would "relax and act naturally".

The members of my FaceBook fan club are already familiar with Erica and her talent for taking picture thingies, but for those of you who are not, allow me to tell you about her.

Erica and her mate live in a place called North Pole, Alaska. The United States Air Force banished them there just over a year ago. Alaska is a place in the farthest region of the North American Continent that is home to bears, mooses, eskimos and other assorted wildlife. It is cold, dark and it snows 425 days a year.Within a few weeks of her arrival, she was bitten by a parisite that is common in those parts and as yet incurable: Gottitakus Picturus. Otherwise known as the "shutterbug". This parasite causes its host to go out and buy photography equipment and take pictures of all they see. It is a relatively harmless condition and can actually become beneficial if the patient is exposed to a subject worth taking pictures of. (such as myself).

Since being infected, Erica has spent most of her free time wandering the great wilds of the north snapping away like a woman possessed. She has photos of stars, auroras, moose, eagles and various other subjects. She has even been able to document the behavior of Alaska's native tribe of aboriginal hockey players. (Homo Erectus Puckien) These natives are very shy and reclusive. One must be very careful when studying them. Often, if they suspect that they are being observed, they will suddenly throw off their gloves and begin fighting among themselves. Some have been semi-domesticated and can be identified by the dents in their heads and the utter lack of teeth. Erica's mate, Kelly, has attempted to "go native" and has been accepted by them and is often allowed to participate in their rituals.

And it's not just me, she has been taking pictures of everyone. Tiger Lily, Jaq, Ivan, even the deer thingies have fallen victim to clicky-click of the shutter and the flashy-flash of the ....well,...flash.

Jaq has been working it. She struts around acting all sweet and demure while singing "Eye in The Sky" under her breath. Tiger Lily has been whining about it non-stop because she soon realized that I will not smack her with all this surveillance equipment laying about (she'll pay later, trust me) Ivan is confused. This led to some amusement after I convinced him that Erica hid a camera thingy in the litter box and made him too paranoid to potty.

In the meantime, I have decided to make lemonade from the lemons that this has handed me. I have invented a new game. I call it: "Mission Imposeable". Basically, I strike a regal pose, wait for Erica to grab her camera, focus..... wait for it........and using my keen feline senses, a nanosecond before she takes the picture, I turn away. This is followed by a great wailing and gnashing of teeth, (hers, not mine) and then I resume the pose. I could play this for hours. I mix it up at times, laying in an unusual manner, feigning sleep, listening as she attempts to stalk me, and then when all is in place, I jump up, lift a leg and clean my nether regions. I suspect she curses me and cries when I am out of the room. 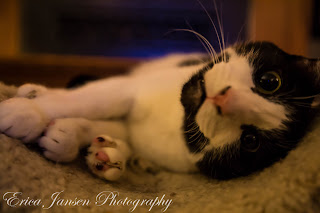 I have nothing against my picture being taken, so occasionally I will allow her to take a usable photograph. It gives her encouragement to continue amusing me. 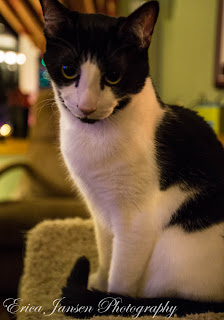 If you would like to see Erica's amazing talent as well as The Royal Portaiture, please feel free to visit and "like" her FaceBook photography page: Erica Jansen Photography.

She leaves my Kingdom tomorrow, so I must now go and cause as much mayhem as I can before she and her mate depart.

I wish all my minions a very happy and blessed New Year! I assure you that my quest for Universal Domination continues.

One last thingy: If Ivan should ask, the CIA has developed surveillance cameras that resemble litter nuggets. 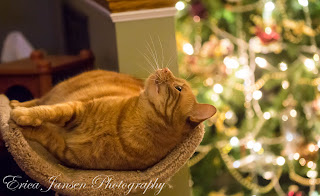 All pictures courtesy of Erica Jansen Photography
Posted by Squiggy at 8:06 PM