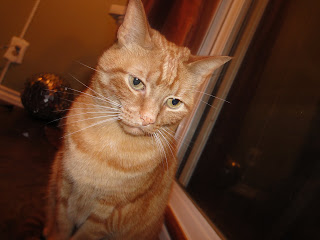 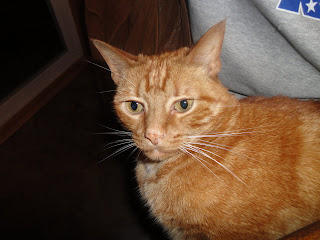 Oftentimes, I can be counted upon to keep secrets.

I can be the soul of discretion.

I have often been called the epitome of confidentiality.

This is not one of those times.

Of late, Ivan has been behaving strangely. This is not breaking news, given the fact that Ivan ALWAYS behaves strangely, but his recent behavior has been beyond the pale.

He disappears for long periods of time. When he returns, he is grinning. This annoys me. I have neither heard nor witnessed anything that should cause Ivan to be amused. As a matter of fact, I do not recall giving Ivan permission to be amused. Mind you, it does not take much to amuse such a simple mind, but it is irritating nonetheless.

Now before I go on to explain what I have discovered in regards to Ivan's newly found happiness, allow me to issue a warning:

What follows , while amusing, is also disturbing in the extreme. So if you have a sensitive stomach, ears, eyes or any other part of your anatomy, you may wish to close your eyes until I tell you this is over.

I decided to watch Ivan. I observed him entering the guest bedroom. This is not unusual because this is where the litterbox is kept. However, Ivan did not return for almost an hour. Even Ivan cannot squat for that long. Oh sure, he is capable of some truly epic clump creation, but I heard neither grunting nor scratching and soon realized that he was not in the litterbox at all.

I thought to myself : "Perhaps he has found a previously undiscovered sunbeam and is hogging it for himself." But I could hear sounds emanating from the bedroom and those sounds were distinctly NOT snoring.

Soon the noises subsided and Ivan returned to the living room with the silly grin plastered on his abnormally small face.

The next day, I stealthily followed Ivan. Watching from the door, hidden in shadows, I watched as Ivan jumped onto the bed thingy. Once there, he approached a large stuffed bunny that one of the offspring of the two leggers left on a previous visit. What followed next is all too obvious.

Apparently Ivan is trying to reproduce.

I don't think Ivan realizes that he lacks the equipment. Due to his incredible girth, Ivan has been unable to see between his rear legs since he was a kitten. This is compounded by the fact that he occasionally sits on his tail and understandably mistakes it for his missing plumbing. (This usually results in him strutting around for several days with an insufferably smug smile on his face) I haven't the heart to tell him of this case of mistaken identity.

I do try to keep an open mind when it comes to "unorthodox pairings", but this borders on the unholy. A cat and a food group (no matter that it is stuffed) just seems wrong.

But, Ivan seems content and the bunny doesn't seem to mind that much. So I'll allow it for now.

Plus, it's just so darned amusing.

Okay, all those who heeded my warning and closed their eyes may open them now.
Posted by Squiggy at 10:41 PM