The two leggers think they can outsmart me.

In spite of over eight years of trying and a massive amount of empirical evidence to the contrary, they honestly believe that they are capable of hatching a nefarious plot that will catch me unaware of their machinations.

As I mentioned in an earlier post thingy, I have been undergoing subcutaneous fluid therapy every other day since February. To give them credit, the two leggers have been doing everything within their meager power to make the treatment as painless and non-stressful as possible for me. In contrast, I have been doing everything within my great and awesome power to make the ordeal as painful, stressful and unpleasant as I can for them. They try to sneak about when they prepare the bag thingy, They communicate with each other using furtive looks and strange hand signals. They attempt to distract me with food and toys. They take care to alter the timing of the treatments lest they become too predictable and I discover a pattern.

But I am not so easily fooled. I always know what they are about.

That being said, last week, their semi-covert activities became more secretive than usual. They came home with a bag from the pet store and immediately I knew something was afoot. What lay within was even more horrifying and hideous than I thought possible.........

They bought me a harness!!! 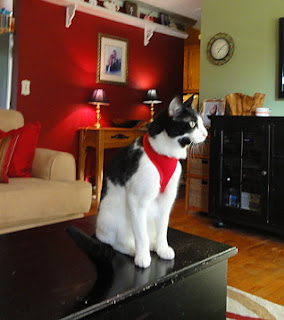 They tried to convince me that it was "Royal Vestments", and I'll grant that I make it look good, but in spite of their subterfuge, I knew it was nothing more than a harness.

Later that night, the female's shoes suffered the consequences of my displeasure at this indignity.

Early the next morning, the two leggers were up early and instead of serving my breakfast, they rudely awakened me from a wonderful dream in which I was shipwrecked upon a deserted island inhabited by slow-witted, overweight squirrel thingies who have never developed the ability to climb trees. The two leggers grabbed me and unceremoniously threw me into the kitty carrier. As they carried me to their car, they informed me that they were taking me to a distant land called "Seattle". They said it would take about two and a half hours to reach our destination.

The combination of the harness, the kitty carrier and the car could mean only one thing........ I was being taken to the vet thingy.

I am fully aware that in order to stay healthy, the visits to the vet thingy are a necessary evil. However, it doesn't mean that I have to enjoy it. Nor does it mean that I have to allow anyone else enjoy to it either.  Therefore I decided that like two legger offspring, it was my duty to make the long car trip as miserable as possible for the occupants of the front seats.

Knowing  that two leggers have very sensitive hearing when confined in a close space, I was tempted at first to make the most annoying noise known to man. However, I don't know the lyrics to any Justin Bieber songs, so I decided to spend the next two hours yowling instead. Their response was to first turn up the volume of the radio. I responded by turning up the volume of the yowling. They countered with measured pleading for quiet followed by shameless begging. Given the fact that I was still in the car, and that I was still on the way to see the vet thingy, their pleas fell on deaf ears.

About half an hour into to the trip, the female decide to let me out of the kitty carrier granting me the liberty of wandering about the interior of the car. She told me that I was free to roam about as long as I did not attempt to enter the area where the male was controlling the vehicle.

I responded by immediately jumping onto the lap of the male.

This resulted in a great amount of screeching, some of it even came from the tires. The female extricated me from the male's lap and tossed me into the back seat with a great waggling of fingers and verbal admonishment.

Realizing that a direct assault would not answer, I figured that perhaps something subtle was called for. I discovered a small compartment located just behind the rear seat back. While their attention was on the road, I climbed into the compartment and went totally silent. Within 45 seconds, the two leggers became aware of the silence.

Those of you who are in servitude to felines are well aware that when in the presence cats, silence is not "golden", it is "suspicious".

Their suspicion resulted in the male pulling off the road and a ten minute search of the car that would have done any police department proud. Finally the female discovered my hidey hole and imprisoned me in the kitty carrier once more.