In the past I have spoken of the special capacity for amusement that goat thingies possess.

I now realize that I have underestimated them.

In past posts, and in my books, I  have spoken of my resident goat thingy minions Gracie and Bobbie. As many of you are aware, both Gracie and Bobbie crossed the bridge last year and are now causing chaos in the Heavenly Pastures.

However, shortly after Gracie crossed, the two leggers brought home a new goat thingy named "Copper". Copper is a large young male and is possibly the goofiest creature to ever walk this Earth. It seems he has not been a goat for very long because the two leggers informed me that he is a "Newbe-an". 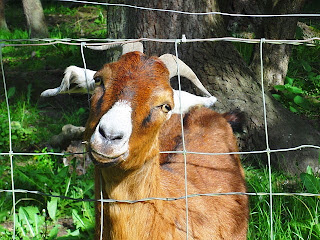 For the last six months I have watched from my bay window as he frolics about, performing great acts of goofiness. He jumps, bucks, snorts, runs, rolls, rams trees and fence posts.

It is as if my bay window has become a giant talking box thingy that only plays Jerry Lewis movies.

While I find his daily antics most amusing, never was I so amused as when the male two legger spent last Sunday performing maintenance on the fence that surrounds Copper's enclosure.

That morning, the male two legger gathered wire, pliers, fence stays and other assorted fence-fixing stuff. He deactivated the electric fence, placed a carrot in his pocket and went forth to battle the fence.

As he approached the gate, he offered Copper the carrot as a "Now you're gonna be a good boy and leave me alone while I fix the fence" offering. Copper took the carrot gladly. However, being a goat thingy, he could not bring himself to fulfill the rest of the contract. Leaving the two legger unmolested and unmessed with would violate at least 27 statutes in the original charter and by-laws of the United Goat Thingy and Barnyard Denizens of America (UGT-BDA) union. If word got out that he had allowed the two legger a carefree day of mending fence in his presence, Copper could be censured, sanctioned and possibly even shamed in a very ugly FaceBook post.

This was the moment that Copper had been waiting for. Amazingly stealthy for such a large, ungainly beast, Copper galloped across the pen. Lowering his head thingy at the last moment, he slammed into the two legger's left butt cheek.

This obviously impressed the two legger because he immediately dropped to his knees and bowed to Copper.

Taking the lowering of the two legger's head as a sign of challenge, Copper stood up on his hind legs and in one fluid motion, brought his head squarely down upon that of the two legger. The sound of the impact rattled the windows and came very close to waking Ivan who was napping beside me. It was so great that for several seconds, he just lay there stunned and obviously out of his wits. I was tempted to call the paramedics, but worry not, after a few moments Copper regained consciousness.

Meanwhile, the two legger had continued his work and was in the process of splicing a broken section of the electric fence. Just as he grabbed the wire to be repaired, he suddenly jerked straight up, twitched and dropped to the ground. Rising slowly to his feet, he wiped a small bit of drool from the corner of his mouth and stumbled towards the house. Once inside, he once again cut the power to the electric fence that I may or may not have "accidentally" re-activated while in pursuit of an alleged moth.

As he exited the house, his mate called from the back room, "How's it going Sweetie?"

"Oh that's nice. Just let me know if you need any help".

He returned to the goat pen and continued his labors.

Copper, was of course ready for him. As he opened the gate, Copper came bounding across the pen and slammed the gate closed on the two leggers fingers. This caused the two legger to wave his hand in a most erratic manner while using language that I dare not repeat.

It was at this point that a sunbeam appeared and I felt compelled to honor it with a nap.

An hour or so later, I was awakened by the male two legger opening the door. He was covered from head to toe in dust, dirt, mud and blood. His jeans were torn, his shirt tattered and he had a blank (blanker than usual) look on his face.

Upon beholding this gruesome sight, the female rushed to his side and asked "What on earth happened?"

"I fixed the goat pen." he mumbled.

"You went into the pen to fix it?"

"Of course," He murmured "How else could I do it?"

"By reaching through from the outside" She suggested.

She then went outside and demonstrated by repairing the last unfinished section as Copper watched, contentedly chewing his cud.

On a totally unrelated note, the male bought her a pair of pink-handled fencing pliers for Mother's Day. 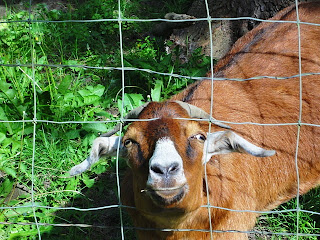