I have taken the next step in my quest for Universal Domination.....

After much studying, observation, pondering, and the consumption of large quantities of catnip, I have discovered the secret of the ancient art of making fire.

Until now, only two leggers possessed the ability to create fire. They have kept this ability a very closely guarded secret since their prehistoric ancestors discovered it back in the 1980's.

Before I disclose the secret to this holiest of holies, I will first give a brief synopsis of the history of fire:

Back in the Pre-Cujolithic Age, between seven and 52,000,000,028.39 years ago, two leggers were incapable of making fire. Fire existed, but was only known as "big glowy hot stuff" and only occurred when natural disasters such as forest fires and volcano thingies happened. Back then, the cave dwelling two leggers would sit around on rocks outside their caves (the beds they had meticulously constructed from animal skins stuffed with hay inside the caves were occupied by prehistoric felines) and would pray for some such cataclysm to occur. Vigilantly scanning the horizon for the tell-tale signs of smoke, lightning or exploding mountains, they patiently waited.  At the first whiff of smoke in the air, they would grab their cats and rush to the site of the impending inferno. Once there, they would construct small wooden structures covered in carpet called "thrones". Only after placing their cats upon their "thrones" next to the edge of the fire, would the two leggers utilize the fire for such trivial matters as cooking and insurance fraud.

This was all well and good for the cats, but terribly inconvenient for the two leggers. So one day a two legger named Harvey Firestein came up with the idea of constructing a large stone box. Once the box was built, and after removing the cats that seemed to instantly appear in the aforementioned box, Harvey filled the box with wood and by striking two rocks together was able ignite the wood within.

In honor of his ingenuity, Harvey's fellow prehistoric cat lovers started calling the big glowy hot stuff "firestein". Later this would be shortened to "fire" by an American rock band who felt that "C'mon Baby Light My Firestein" didn't sound quite right.

Now to return to the present. Two leggers have perfected the art of making fire to the point that firebox thingies can be found in almost every house on Earth. In front of every firebox thingy will be found a throne occupied by at least one cat and in some instances, a dog thingy laying passed out on a rug. However, one problem remained: The occupants of the thrones and rugs were still forced to rely upon the two leggers to light the frebox thingy which they seem loathe to do whenever they are not currently at home.

So, in the quest for knowledge and the ability to keep the Royal Hiney warm, I have been watching the motions of the two leggers. I feign sleep, and I watch. I hide in the artificial flowers, and I watch. I conceal myself in the comforter, and I watch.  I have observed that whenever the two leggers pick up a small gray box with buttons on the surface, the firebox thingy ignites. When they pick it up again, it extinguishes the flame.

It became obvious to me that the buttons on the small gray box are the key.

So the other day, after the two leggers left for work, I stalked the small gray box with buttons. 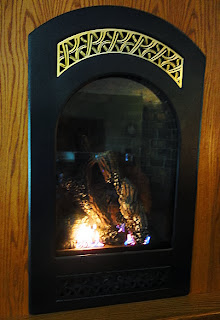 Suddenly Ivan, Jaq and Tiger Lily were bowing, grovelling and worshiping the Bringer of Fire.

As I was basking in the warmth of the fire and their adoration, one thing slipped my mind.

Now that it was on, how do I turn it off?

Ivan even tried blowing on the fire, but it only singed his whiskers.

As they entered through the front door, I stood proudly in front of my triumph. I assumed they too would bow to my resourcefulness. They would be overwhelmed by the fact that I had warmed the house to a balmy 97 degrees in anticipation of their return from a cold day at work.

Instead, the female immediately grabbed the little gray box with buttons, and through some complex series of button pushing, turned the firebox thingy off while the male stood glaring at me and tapping his foot.

Since that fateful day, the two leggers invariably hide the little gray box with buttons whenever they leave my house.

It is only a matter of time before I discover where they hide it.

And then, once again, all will sweat.