The Mystery of The Stynx

This morning I awoke to the sounds of two leggers sniffing.

Not sniffling, as when they have a cold and their brains begin to melt and drip out of their nose thingies.

This was a definite sniffing, as when they catch a whiff of an odor they either don't like or cannot identify.

They were moving through my house, nose thingies quivering like a bunny on recreational pharmaceuticals, heads bobbing up and down, searching for the elusive aroma. They thought that they had solved the problem when they discovered a cache of ancient grapes that had somehow rolled (or possibly been batted) beneath the fridge.

This activity peaked my curiosity so I decided I should observe them on the chance that it may prove amusing. And so I watched.......

As they moved from room to room, practically hyperventilating in their quest to locate their odiferous objective, Jaq was sitting in a shoebox quietly singing "Something in The Air" by Phil Collins. Every time that they thought they had tracked the offending odor to a particular room, they would conduct a thoroughly fruitless search for its source. After completing the search, they would discover that the scent had miraculously migrated to an entirely different room.

In their mission to locate the source of the stink, they failed to notice one thing: 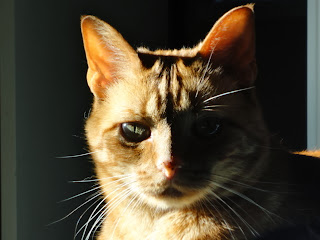 Every time they entered a room from which the odor seemed to be emanating, a large orange ball of badness would silently slink through the door, quietly chuckling as it passed.  This continued for most of the day. The two leggers would search for a while, and then give up and go on about their business until suddenly one of them would catch a hint of the scent and the search would begin anew.

I have to give Ivan credit. He has surpassed my low expectations. His plan for causing chaos while simple, has proven to be gloriously effective. It has also resulted in the added benefit of causing the two leggers to clean beneath both the fridge and the oven, thus returning two foil balls, four feather thingies and a catnip mousy thingy to my toy box.

I decided to congratulate Ivan on his accomplishment. Following my nose, I found him napping on the floor in the bathroom.

As I entered the bathroom, I discovered Tiger Lily busily rubbing the slumbering buffoon with a piece of moldy cheese that she had "liberated" from the trash can.

I guess whine and cheese really do go well together.