Those of you in my FaceBook Fan Club have been following along as my female two legger has posted about her and the male's attempts to capture my newest outside minion.

For those of you who are not members of my fan club, I will now give a brief synopsis of their mostly ineffectual efforts.

Those of you who already know the story may look away until I finish the review. Or go to the restroom, perhaps read the newspaper for a few minutes, maybe make some tea or help yourself to a cold beverage. Do as you please, just give me about five minutes to give everyone else some background.

I'll let you know when to start reading again.

Okay, now that they're gone, allow me to catch you up.  About six weeks ago, a small black stray showed up my Kingdom. She seemed fairly harmless, and completely wild, so I decided that she could live under my back deck. The female two legger named her "Sheba", but after much pondering, I have decided that her name should be "Sheba".

However, after watching her for several days, (and by "watching" what I really mean is standing at the window, hissing, poofing and then beating up anyone in my general vicinity) I realized that there was something odd about her. Her shadow seemed strange. For one thing, she cast a shadow on rainy, overcast days. Sometimes I could even see it at night. But the strangest thing about her shadow, was that it seemed to have a mind of its own. With little or no warning or provocation, it would leap straight into the air and scamper back under the deck. Once, I witnessed it jumping on her back and biting her head.

I am ashamed to say that it was Ivan that solved the mystery. As I sat watching these curious shadow shennanigans, Ivan walked up and said "Yo Boss, what's wit da kid?"

It was a kitten thingy!

I've read about them in books, but have never seen one personally.

After watching it frolic in my yard for several minutes, I reached a conclusion

They flip around, acting all cute and stuff, bouncing everywhere, hissing at pine cones, attacking fallen maple leaves. For my Canadian minions, relax, they are actually leaves, you know, from trees, not hockey players from Toronto (Ivan attacks those).

So I decided that "Sheba" should lay off the baby-making and spend more time irritating the squirrel. Now scientist thingies have done studies on the reproductive habits of feral cats and their findings are startling. By using the mathematical formula of  (a+g)-(14.682-b)+15% we find that a sexually mature female feral is capable of producing.......well, a whole bunch of tiny leaf menacers. More if catnip and wine are involved.

Fortunately, a local minion by the name of Pat informed my two leggers about a place called The Northwest Organization of Animal Help (NOAH). They are a no-kill animal shelter that also provides spaying/neutering services for feral animals Pro Bono (although they don't seem like U2 fans). Pat was also gracious enough to loan my two leggers a trap thingy in order to safely capture Sheba and transport her to NOAH.

Okay, all you who looked away earlier may now pay attention.

So, the two leggers brought home the trap thingy and the male spent the next two hours staring at it like a chimpanzee at the zoo staring at a new tire swing. Finally he figured it out and set the trap in the yard.

The very first night the trap worked perfectly. It caught a raccoon. The second night, it caught another raccoon. The third night, the two leggers got smart and posted a sign on the trap that read: "KATS ONLY! NO RACKOONS ALOUD!" Fortunately, the raccoons overlooked the misspellings and stayed away, allowing the cat trap to actually trap a cat......Yup, you guessed it, they caught the kitten. They immediately amended the sign to read: GROAN KATS ONLY! STILL NO RACKOONS ALOUD!"  Taking pity on the two leggers, Sheba finally walked into the trap, and while staring right at the poorly hidden two leggers, deliberately stepped upon the plate that triggered the door.

So very early this morning, the male loaded her into the car and drove her to NOAH. When he came back, he couldn't stop talking about the wonderful staff. From what I gathered, they are all about protecting and helping cats.  They provide veterinary services for low income families as well as adoption and the aforementioned feral services.

So I am sending out a special thank you to the entire staff at NOAH! 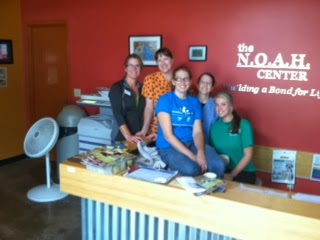 They also help dog thingies, but hey, no one's perfect.
Posted by Squiggy at 10:01 PM