Yes, I know that this is a somewhat ambiguous statement. Ivan always acts a bit.......odd.

However, he is now acting odd even for Ivan.

Normally, Ivan acts odd in a fairly predictable and easily explained manner. His strange activities can usually be attributed to his lack of brain cell thingies. When he suddenly takes an intense dislike to a spot on the floor in the hallway and attempts to smack it into submission, we just smile and shake our heads and say "Well, that's just Ivan." When he violently awakens from a midday nap, poofs, crooks his tail and runs headlong into the nearest door, we roll our eyes, check for a pulse on his unconscious form and say "There he goes again." When he inexplicably gets spooked by a stray sock on the bathroom floor and slays the offending hosiery, we simply smirk and say "Oh Ivan, you nutball." It is all fairly normal for such an abnormal individual.

This is a different species of odd.

He has been acting not only odd, but spooky odd.

In spite of his pudgy, malformed and just plain strange physique, Ivan is capable of amazing stealth. In the past he has shown an incredible ability to sneak up on any number of things. Q-Tips never see him coming until they are in the depths of his maw. Dust bunnies are slain with absolutely no warning of their impending doom. I once witnessed him stalking and slaying a milk carton ring thingy that was lying next to a sleeping two legger and he accomplished this without disturbing the slumber of the napping two legger.

Now, he seems to be utilizing his supernatural stealth for more nefarious purposes. 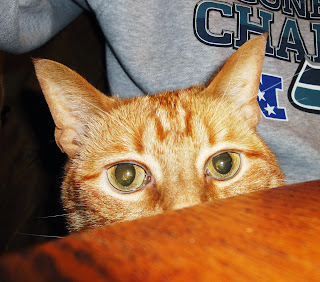 For the last week or so, Ivan has been suddenly appearing in the strangest of places. I leave him napping on the bed, walk into the bathroom and there's Ivan sitting in the tub thingy, staring at me. Later, I notice that he is sprawled on the heated bathroom floor, I head to the litter box and when I arrive, there he is sitting behind the box, softly snickering to himself. Why just yesterday, I swear I saw him in the bay window, in a full on sunbeam-induced coma, yet when I turned to jump up to my throne in front of the firebox thingy, I discovered that he was already there, warming his ample buns in front of MY firebox thingy.

I am unsure of his intentions. Is he attempting to give me a case of heebie-jeebies? Is he trying to showcase his prowess in a bid for a promotion? Is he being manipulated by Tiger Lily in order to get revenge for her daily smackings?

Just to be careful, I have decided to cover all my bases.

First of all, I have informed him that I have been inoculated against the heebie-jeebies, I have promoted him to the rank of Chief of Hallway Spot Menacing, and finally I have decided that I will no longer smack Tiger Lily on a daily basis.

I will now smack her on an hourly basis.
Posted by Squiggy at 11:36 PM