Ah, October! One of my favorite times of the year.

The leaf thingies on the tree thingies have begun to change color and drift lazily to the ground. The temperature has steadily dropped, causing the firebox thingy to awaken from its Summer slumber. The goat thingies have suddenly grown fluffy and frisky. They spend the day beneath the lone maple, eagerly devouring each and every leaf as it falls. I imagine the squirrel thingy is staying awake at night, anxiously dreading the windstorms brewing on the horizon.

Best of all, it is the time of year that all two leggers everywhere decide it is time to scare the bejeezus out of themselves. Every channel on the talking box thingy is showing horror movies, scary documentaries, tales of the occult, ghost stories, gruesome mini-series, and Miley Cyrus videos.

My male two legger in particular loves to spend time watching old horror movies and documentaries about unexplained phenomenon. I find this behavior perplexing. For the most part, he is a very rational, scientifically-minded individual who despite my best efforts, more or less retains his sanity. But come October, he suddenly turns into an aluminum foil hat wearing, crucifix carrying, holy water sprinkling, certified nutter.

I am not complaining.

His annual fortnight of insanity offers a great opportunity for one who may be tempted to make the most of this Fall flakiness and turn it to their own nefarious advantage.

One such as myself.

Purely out of scientific curiosity, I have decided to find out just how far out of the tree we can push this particular nut.

Oh sure, I could probably severely startle him by suddenly leaping at him from some dark corner in the middle of the night, hissing and yowling, a furry wrecking ball of teeth and claws, but the terror would be short-lived and just not that satisfying. Trust me, I speak from experience when I tell you that scaring him in that manner loses its novelty after the twenty-third time.

So this year, I have decided to take the more subtle, long-term approach. Instead of sudden moments of abject terror, we would provide him with hours and possibly weeks of steadily increasing uneasiness.

Monday, while the two leggers were at work, I called a meeting of my minions and assigned them each their roles in what I have named "Operation: Dirty Drawers".

*Side note- For all my international minions, the word "drawers" is an American colloquialism meaning "pants". Also known as "britches" in the American South, "trousers" in the United Kingdom and "ankle warmers" in California.

For all his clumsiness, Ivan can be quite stealthy. Therefore, I gave him the assignment of being the Creepy Presence That One Senses From The Corner of One's Eye. The job of the  CPTOSFTCOE is to always remain on the periphery of the target's vision. Using multiple designated hidey-holes, the CPTOSFTCOE appears and disappears at random intervals, never allowing the target enough time to identify the source of the movement. This method when utilized correctly can cause nervous tics. In extreme cases, whiplash can occur.

I appointed Jaq to be the Royal Minister of Spooky Sounds. As RMSS, Jaq is required to make strange sounds in the darkest hours of the night. She has a great repertoire of noises ranging from the soft creaking of a loose floorboard to the sudden staccato rapping from an empty room. Jaq is so adept at her duty that I have been forced to issue ear plugs to Ivan in an effort to keep him from bolting in terror and confusion. Mostly confusion.

Of course, I will be responsible for the Coup de' Paw. Every night I will stand at a window, peering through the inky darkness, when I know that I have his full attention, I will suddenly hiss, poof and bolt from the room. Sometimes I will even pretend to cower under a bed. This usually causes him to grab a flashlight thingy and search the entire area outside the window. This is especially amusing when it is raining or stormy outside.

But my latest and favorite manner of creeping him out came to me quite by accident. I was watching the talking box thingy one night when they aired a story of a cat in a nursing home that seemed to know whenever an elderly two legger was doomed to pass away. This cat would visit the two legger's room and often sit at the foot of their bed, staring at them in a knowing manner.

Hence, every night as the two leggers sit and watch their programs, I take my place on the hall table. 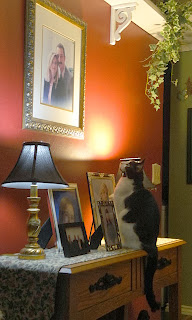 I hope he makes it to Halloween.