My Comrade In Chaos

The other day while I was at the vet thingy's office, I was reunited with an old acquaintance.

Zharkhov, the self-proclaimed "Guardian of The Land of Unpleasant Pokings". You may remember Zharkhov (aka Mr. Tinky) from an earlier post called "A Foreign  Exchange". (click on the title to follow the link). Zharkhov, was the resident cat at the veterinary hospital where I was being treated after nearly shredding this mortal coil.

In the short time that I was sequestered in the Land of Unpleasant Pokings, I had grown quite fond of the old Russian Blue. His eccentric manner and odd way of speaking had quickly endeared him to me and I have often wondered how he fared.

As luck would have it, Thursday, while attending my quarterly health check, I heard a familiar voice coming from the adjoining exam room:

"Vad do you tink you are dewink? I am not needing unpleasant pokings! I am finest spaceyman of roobust Rooshan healdt. Back away wit dat unpleasant poking dewice!" Suddenly there were the sounds of a scuffle, a blood-curdling scream, followed by the sounds of two legger footsteps beating a hasty retreat down the corridor.

"It is I, Cujo, High Poobah and Supreme Ruler of All Universe Thingies (known and unknown), Menacer of Squirrels and Smacker of All Things Whiny!" I replied.

"Not that I'm aware of. In fact, I seem to be very much alive and well." I said

"Da, is good. Being dead is bad for health".

At this point, one of the vet techs came in and took me to the lab for my bloodwork. At the same time, another tech had grabbed Zharkhov and brought him to the lab as well. After placing us in adjoining kennels, the tech went about their unpleasant business leaving Zharkhov and I to speak in relative privacy.

I asked him why he was no longer allowed to roam the halls of the Land of Unpleasant Pokes. Come to find out, he no longer resided there. It seems that shortly after our last meeting, Zharkhov had been reassigned to a new location. He is now the Official Therapy Cat and Mascot at Sunny Acres Retirement Home.

Intrigued, I asked him to describe his new life.

"It is not so bad.", he began, "Land of Wrinkled Two Leggers is wast. Many different rooms and beds upon vich to lay. Zharkhov has many laps to choose from. Wrinkled ones move wery slowly. Some wrinkled ones no move at all. Wery relaxing. Much food for Zharkhov. Wrinkled ones often drop food on floor. Dis prowides many snacks for Zharkhov. Only ting Zharkhov no like is veelchairs. Veelchairs make Zharkhov's tail nerwous. Also, smells not so good."

Zharkhov was describing an ideal life for a cat. Unlimited napping, unlimited laps, food around every corner, constant attention and affection. He told me that they even had something called a "sun room" with floor to ceiling windows where the residents could spend the day quietly contemplating the abundance of bird thingies just outside.

In spite of his description of this idyllic existence, I couldn't help but feel sorry for him. There seemed to be one vital ingredient missing........chaos. How could any card-carrying feline possibly be content living in a place that was engineered to be completely serene and peaceful? Where they frown upon spontaneity? Where calmness was encouraged and mayhem was discouraged? No, my friends, this is no life for a proud Rooshan cat whose ancestors had once graced the laps of czars, czarinas, emperors and other various cyrillic despots.

I asked Zharkhov about this discrepancy.

"Da, is boring at times. Boring is sometimes good ting for old cat such as I. But Zharkhov not alvays bored. Zharkhov has vay of keeping amused. Zharkhov knows old two legger legend of Banshee. Banshee is spirit dat wisits two leggers before dey die. Banshee makes keening sound in middle of night. So sometimes in meedle of night Zharkhov make Banshee sounds."

"And this makes the wrinkled ones panic?" I asked hopefully.

Well, I can't argue with that.

Soon the vet thingy came and told me that my checkup was good and that I was healthy as could be. As I was carried from the room, I looked back and waved farewell to my Rooshan friend. 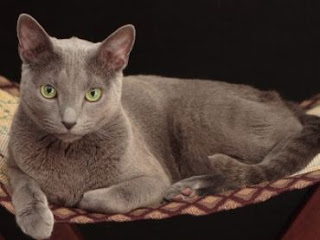