For any of you out there that may question my Tomhood, I will now put your doubts to rest.

I am the furry little angel of destruction that lays waste to all who cross me. Nothing that annoys me can be suffered to live. There is no irritant that can withstand my wrath.

All my enemies should justifiably quake with fear. All squirrel thingies should sleep lightly with one beady little eye open. Dog thingies should give my yard a wide berth. Any two leggers planning to break into my Kingdom with nefarious thoughts of larcenous intentions should give it another think.

I am the two-toned death that stalks the night.

Last night I killed a bear.

That's right, you read correctly, I killed a bear.

Now I realize that many of my readers are very sensitive when it comes to the mistreatment of animals. Many of you are very active in different animal rescue agencies as well as proponents of anti-cruelty legislation. I have often read your protests regarding the way I treat Tiger Lily. I choose to ignore those protests, however, I assure you, I read them.

Just like Tiger Lily, the bear had it coming.

The bear in question was brought into my kingdom by the male two legger. It was a present for the female who had been feeling ill. I do not purport to understand this two legger custom of giving vicious carnivores to loved ones who are suffering, but there is much about two legger behavior that I find confusing.

This bear, named "Sniffles", was immediately adopted by the female and has held a place of honor in their bedroom ever since. 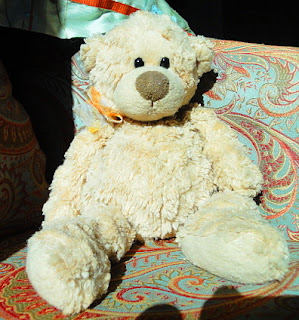 From the moment I saw Sniffles, I knew he had to die. His black lifeless eyes hid a soul so dark that it threatened to drain the spirit out of all those he encountered. Beneath the plush fuzzy belly beat a heart so black that the crucifix in the hallway kept falling in the middle of the night. Okay, that mighta been caused by Ivan slamming into the closet door, but I'm gonna blame the bear.

Every time I entered the bedroom, I could feel it watching me. 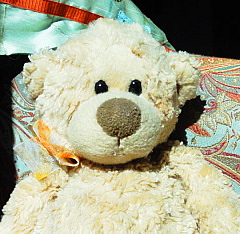 I suspected that when I was not in the bedroom, it mocked me and whispered in the female's ear, casting aspersions upon my character and blaming me for things I may or may not have destroyed.

But mostly, Sniffles watched me.

This posed a dilemma. How could I be expected to perform my mayhem causing activities under the constant scrutiny of "Sniffles the Snitch?"

I decided the bear must die.

It must die soon.

It must die cruelly and without mercy.

I ordered Ivan to bring me the head of Sniffles. Ivan puffed himself up and entered the bedroom. And so I waited....... And waited........ And waited. Failing to hear any hissing or screeching, I peeked around the door only to find that Ivan was curled up next to Sniffles and taking an unauthorized nap. This was intolerable. I smacked Ivan and ordered him from the room.

I ordered Tiger Lily to go whine at Sniffles in the hope that he would be driven to running away. However, after several minutes, I realized that she was sitting next to Sniffles swapping stories about Yours Truly. I smacked her so hard that she lost three whiskers and bolted from the room.

Finally, I realized that I must slay the bear myself. As the male prepared for bed, I was able to slink unobserved to the edge of the bed. Silently slipping under the bed, I cautiously crept to the other side, taking a few moments to wreak havoc on a nest of dust bunnies that had previously escaped slaughter. Lurking under the bed until the lights were extinguished, I patiently waited and suppressed the giggles of anticipation that threatened to betray my hidey hole.

Finally, the lights went out and it was time to make my move. Emerging from beneath the bed like a demon escaping the depths of Hades, I pounced upon the interloper. Wrapping one paw around his face to stifle his screams of terror, I punched the back of his head with my free forepaw while simultaneously eviscerating him with the repeated kicks of my hindpaws. After tearing out his fluffy white innards, I chewed on his face until I was sure that he was well and truly deceased.

All of this was accomplished in total silence only four or five tailspans from the peacefully slumbering two leggers.

This morning, the two leggers awoke to a scene of great gore and carnage. The male cleaned up the mess. The female said not a word. Her cool attitude towards me leads me to believe that she suspects that I had a paw in the death of her bear. 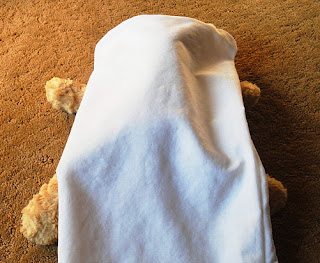 That is fine with me. Perhaps after seeing what I am capable of, she will think twice before threatening me with the water squirty thingy.