Spring has finally returned to the Pacific Northwest.

As many of my longtime minions know, Spring is the harbinger of many thingies.
Bob returns to my yard from wherever avian drag queens spend the Winter.
Squirrel thingies once again infest my yard and attempt to mock me.
Bird thingies are once again plentiful for my nourishment.
The two leggers begin their manic gardening activity.
Ivan awakes from hibernation (though no one can tell).
Flower thingies bloom.
The male two legger begins yelling at the talking box thingy because his baseball team is losing ( as opposed to Fall when he yells at the talking box thingy because his FOOTBALL team is losing).
The Sun shows itself for an hour each week.

And finally, total war is waged upon the eight leggers.

I realize that the definition of "snickering" can be ambiguous, so just to be clear, I will define it for you now:

They snicker, snicker and occasionally..........snicker.

Snickering is a prime symptom of evil. Ergo- anything that snickers is by definition evil.

While I do not mind the eight leggers "creeping out" my two leggers, it offends me that they may attempt to usurp my position as Chief Creeper Outer of All Things Two Legged. Therefore, as Benevolent, Kind-Hearted, Gentle-Natured and All Loving Dictator, I have decided that all eight leggers must be summarily executed with extreme prejudice and amusement.

I ordered Ivan to seek out all eight leggers and bring them unto my presence. The were to be given a a fair trial after which they would be executed in a most merciful and delicious method.

However, the Bathroom spider heard of my edict and attempted to supplicate me by offering a sacrifice. As I entered my bathroom last night, the Bathroom Spider greeted me at the door with a supercilious smile upon his nasty little face. He waved four of his eight nasty little arms in the direction of the tub thingy. Upon examining the tub, I beheld an arachnid abattoir. This was obviously an attempt at appeasing a blood thirsty deity that was intent upon visiting an unholy vengeance upon all snickering supplicants.

There were tiny legs scattered everywhere upon the porcelain of the tub. Here and there a thorax or a tiny eye staring blankly into space.

The carnage was exquisite.

I accepted the sacrifice and informed the Bathroom Spider that he would be allowed to remain among the living on the condition that he remain in the bathroom and never venture outside lest he be smacked by the Royal smacking paw. 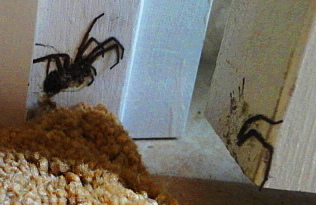 Can't say I didn't warn him.